The Le Charmel Muscadet pays tribute to the traditional profile of the Loire valley’s Muscadet while also showcasing a more modern flavor focus.  This 100% Melon de Bourgogne wine is sourced from a single, 75 acre estate outside of the small village of Gorges in the eastern part of the Loire Valley.  When enjoying a bottle, expect notes of pears and melons, as well as a touch of minerality that is found in classic Muscadets.  This wine is both round and yet delicate, able to hold its own with dishes as diverse as raw shellfish to light pastas (if you don’t mind the cultural disconnect!) to playfully interacting with great goat cheeses.

What’s in a name? The Le Charmel Muscadet Sevre et Maine Sur Lie is quite a mouthful.  Let’s break it down: Le Charmel is our French wine label, an amalgamation of Charlie and Mel Master, the father son duo that produce these beautiful wines.  Muscadet Sevre et Maine is the French appellation that our wine comes from.  Sur Lie is French for “on the lees”, and refers to the aging this wine receives in contact with the dead yeast cells post-fermentation.  You’re welcome to just call it “Le Charmel Muscadet”. Muscadet “sur lie” is a superior appellation than just Muscadet. 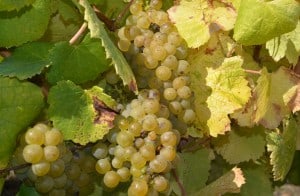 Often shortened to simply Melon, Melon de Bourgogne is the only grape allowed in Muscadet wines.  As the name suggests, the grape was originally developed in Burgundy, but found a new home in the Loire Valley following the freeze of 1709, which killed nearly all of the red wine vines in the Loire at the time.  It was favored by Dutch traders that preferred to make it into “brandewijn”, and as such it was overgrown and exploited, falling out of favor for use in still wines by the 20th century.

However, beginning in the late 20th century, local producers returned to study of the Melon grape, and found that with a little more care and some modern techniques, it could produce delightful, fruity still wine.  By applying oak barrel fermentation and sur lie aging they were able to give some body and complexity to this delicate grape and make outstanding wines.   Stone fruit, green apple and melon flavors abound when this grape is vinified, and it sometimes takes on a slightly salty note, begging for its classic pairing with oysters on the half shell.

The Loire Valley is one of the largest wine regions in France, and it hosts 87 sub-appellations under various levels of classification.  Muscadet Sevre et Maine is a part of the Muscadet sub-appellation at the farthest west end of the Loire Valley, closest to the sea.  The entire Muscadet region encompasses 32,000 acres of vineyards surrounding the town of Nantes.  The Muscadet Sevre et Maine appellation makes up a little over 20,000 acres of vineyards to the southeast of Nantes.

This region is heavily influenced by its maritime climate.  The temperature here is moderate throughout the growing season, and it sees relatively even rainfall year round. The Sevre and Maine rivers help moderate temperatures from day to night.  While much of the Loire has a mostly limestone soil composition, the Muscadet Sevre et Maine has a mix of granite, schist, and clay, and that is reflected in the mineral notes seen in the wines produced there.

A rather recent development in the Muscadet region, sur lie aging, has transformed the wines of Muscadet from light, nondescript bottlings to more substantial and formidable offerings.  To give it additional body and texture, wine makers will leave the wine on its lees (spent yeast cells) and allow it to age over the winter, before bottling in the spring.  This is called “sur lie” aging.  Wines aged in this manner can take on nutty flavors, and the added body will often result in a creamier mouthfeel.  We have tried to extract these positive qualities during our sur lie aging, while still maintaining a delicate, fresh, and acidic wine that pairs well with shellfish and lighter dishes, as well as drinks great on its own. 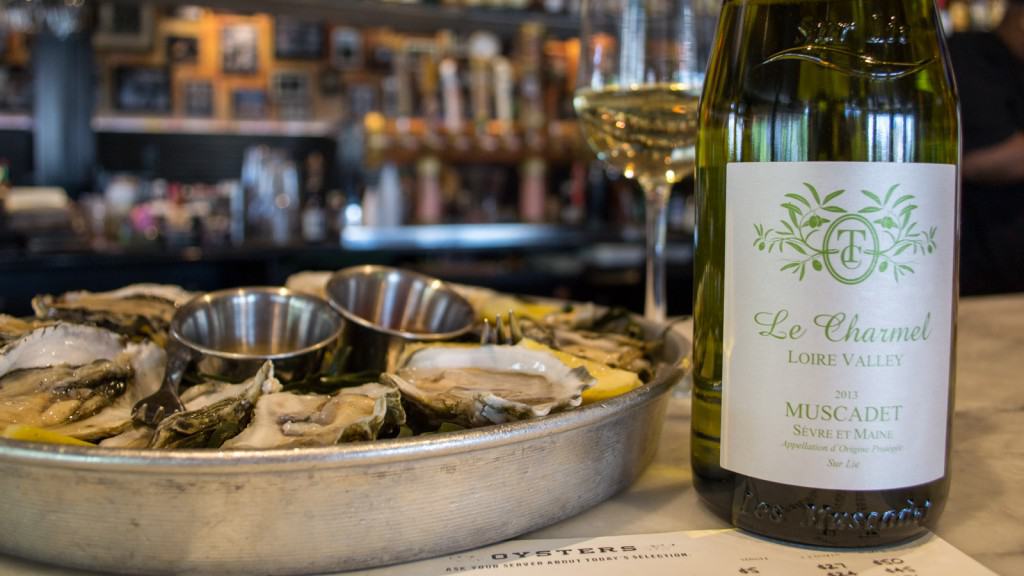 It seems like the pairing of Muscadet wine and fresh oysters on the half shell has been known for so long that it is ubiquitous.  Great wine and food pairings generally stay great, and we still highly recommend this classic pairing.  However, the more recent practice of sur lie aging has produced Muscadet wines with additional body that can stand up to slightly heavier dishes – white fish and lighter pasta dishes spring to mind.  We also love it with high quality goat cheeses.  Adventurous wine pioneers such as Ray Isle from Food and Wine Magazine have even shown that Muscadet wines can find favor in pairings you might not expect: Southern fatty pork dishes, Nashville’s famous Hot Chicken, and even Mexican tacos all found favor with Muscadet.  It is truly a dynamic pairing wine – we encourage you to try it with dishes that you may not expect!