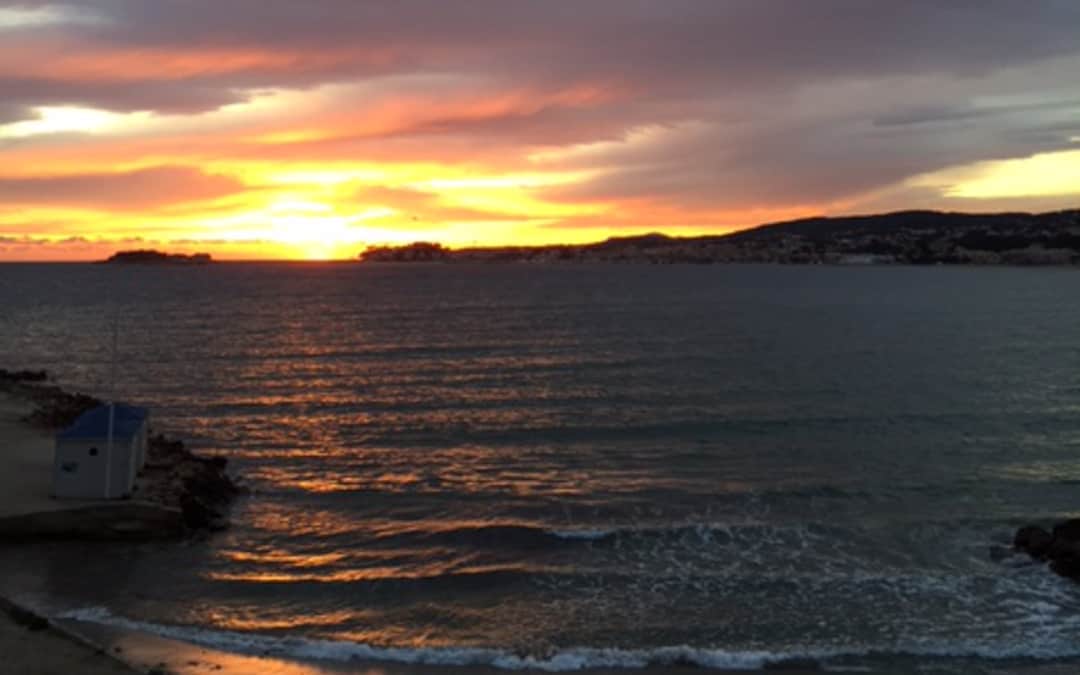 If you’re lucky enough to be able to miss a day’s work then take a day flight to Europe.  Hey, you can always use your computer to keep working on the plane.  Mel and I left Boston at 8 a.m. and arrived in London, Heathrow at 7 p.m. that night after a 5 ½ hour flight.  At 8 p.m. we were sitting in La Belle Epoque restaurant (try it – not too pricey & super menu) at the Sofitel Heathrow in the middle of the airport and then slept like bricks. Never even went outside.   Awoke next morning refreshed and ready for our short flight to Nice with absolutely NO jet-lag whatsoever.

Our plane landed at 11 a.m. in Nice just 3 minutes before the horrific crash of the Germanwings jetliner as it slammed into a mountain just above us.  Too ghastly to contemplate their incomprehensible fate and our own luck that day.

We drove along the Cote d’Azur to the tiny jewel of a town called Sanary sur mer just round the bay from Bandol where the best Provence rose comes from.  Mel opened the glass doors of our balcony at the beach hotel ‘Hostellerie La Farandole’ (www.hostellerielafarandole.com) and we both felt like throwing our return tickets away.  The perfume of white jasmine flowers and the gentle whoosh, whoosh of the Mediterranean waves filled our French souls. Sanary is a beautiful, little fishing town but the hotel is “away from the maddening crowd” and very peaceful. 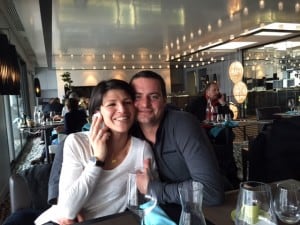 We met our young winemaker Clement Minne and his partner Pauline for lunch and discussed the very first vintage of our Le Charmel Cotes de Provence Rosé that they made for us. We had selected the blend the previous fall and  were absolutely thrilled with the peachy rose flower-water nose in our glasses and the subtle dry but sumptuous taste and are hoping you all enjoy it as much as Mel and I do – it’s all we want to drink over the summer months to come. We ate at the wonderful Villa Madie (www.lavillamadie.com) on the outskirts of Cassis. It is a two star Michelin restaurant downstairs with tables looking out over the Mediterranean but upstairs there is a much simpler but equally enjoyable restaurant called La Petite Cuisine with the same chef. 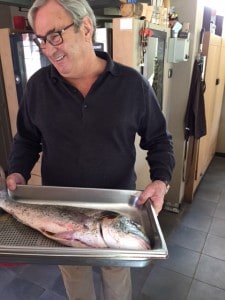 Next morning drove an hour west to our old home in the ‘60s near Aix-en-Provence.  It was a little town in those days but now is a huge metropolis with Macdonald’s and Burger Kings and nowhere to park (we used to park between the plane trees on the wide sidewalk in the Cours Mirabeau to go busking in the cafes!).  Our old neighbor Pierre Hugo still lives in his lovely farmhouse with 2 pot-bellied pigs, 11-year old son Theodore (who sang knock, knock, knocking on Heaven’s door to us on his guitar with a sexy French/English accent) and his lovely wife Claire.  In reply to our gift of 6 magnums of our new Provence rose Pierre presented us with a glistening platter of fresh sea urchins followed by a leviathan-sized fresh Daurade fish roasted whole with baby haricots verts and magnum of white Clos de Vougeot Domaine de la Vougeraie.  So much for fair bartering!

Jumped on the 3 p.m. Very Fast Train (TGV or ‘train grande vitesse’) in Aix and arrived in the center of Paris 3 hours later (7 ½ hour drive by car if you’re lucky!)  These trains are extremely comfortable with free wifi that works all the time and they are always on time and the cost? Only $190 for two! Why can’t we do something like this in the USA?

Anyhoo, Paris at last. We’d been dreaming of these 4 nights for months under the snows of the New Hampshire coast and it didn’t disappoint. We were staying at the Odeon St. Germain on the Rue Ste. Sulpice in the 7th  quarter (www.hotelosg.com). Ask for a back room. It’s charming and not too expensive. We paid about $150 a night.  An hour later we found ourselves happily walking once again across the ‘Pont des Pietons’ (footbridge) which was still struggling under the weight of a quadrillion padlocks that young lovers and old have left locked there for eternity – or until it collapses under their weight!  We crossed the courtyard of the Louvre and over into the Palais Royale decked out in spring splendor of deep blue hyacinths, narcissus, daffodils and magnolia flowers with a blackbird singing his rapturous love warbles in the budding linden trees.  We entered the old oak door of “Chez Georges” on the Rue de Mail a few minutes later and the Maitre d’ blinked his big blue eyes at us and immediately I found myself enveloped in Angelo’s arms and nearly disappeared into his enormous tummy.  He led us to our favorite table in the bar area and Laurant the familiar old bartender turned away and grabbed a bottle of  Domaine Real Martin Provence rose and opened it for us with a grin and a flourish.  At this point an enormous black hairy head appeared from behind the bar and put its paws up on the sink wagging his tail in welcome and we knew we were in heaven (dogs in bars in the US? Never!).

The young owner of Chez Georges, Monsieur Paul, also owns Real Martin and has done a simply terrific job by NOT changing anything except efficiency in this lovely old place.  It’s always “old France” there – tiny radishes and a tub of butter and crusty baguette plonked on our table as you sit. “Ah, “radis/beurre,” we sighed.  Then Mel had a classic frisse aux lardons (frizzy endive with bacon) with a soft poached egg that oozed orange glory and I had a huge tub of smoked herrings in oil with a warm salad of fingerling potatoes and thinly sliced shallots in another huge bowl and was told to help myself.  We were half way through the bottle of rose when our whole Dover sole meuniere arrived swimming in the ‘very best butter’ like the Mad Hatter’s tea party.  If anyone tells you that you can’t find any good classic French bistro in Paris – it’s old cobblers!  Chez Georges is the real thing.  Walked back to digest our feast and next thing we knew it was morning in the St. Germain market with big café au laits and pain au raisins (called ‘escargots) warm from the oven.

Walked up the zillion steps to the Sacre Coeur in Montmartre and spent a couple of happy hours in the Salvador Dali museum (Espace Dali) right beside the church.  His sculptures, drawings and paintings looked to us as if a genius draftsman had fallen into Alice’s Wonderland  – which of course is what Dali is all about.

Spent a happy hour back at the wonderful Juveniles wine bar & restaurant (47 Rue de Richelieu, 75001 Paris, France +33 1 42 97 46 49)  next to the Palais Royale.  Juves, as it is affectionately known, was the creation on one of our oldest and best friends, Tim Johnston who is one of the true characters in the wine business in ANY country!. Today Juves is run by his daughter Margaux and her fiancé, Roman, who is in the kitchen. The food is outstanding, creative and very reasonable and wine list is of course amazing. Don’t miss Juveniles if you go to Paris.

Went for a siesta and then took a couple of umbrellas and ran in the rain to the metro on our way to another wonderful little restaurant called Le Beurre Noisette in the 15th (www.lebeurrenoisette.com) where we had the most amazing dinner with our friends Tim and Stephanie Johnston. A great place to go and reasonable.  As we went down the metro stairs a young man bumped into Mel on the left and out of the corner of my eye I saw him lifting Mel’s wallet out of his back pocket.  Quick as a flash I slammed my hand on Mel’s right bun (very nice one, too!) and the wallet caught in the top corner of the pocket.  The young man bolted back up the stairs and in a nanosecond 2 plain-clothes cops rushed up to ask if we wanted to press charges as their 3rd companion had caught him at the top of the stairs.  We said no (a) because it would’ve been a long and arduous hassle and (b) we already knew that you should ALWAYS put your wallet either in your inside pocket, in a belt-bag or in your wife/friend’s locked and zipped-up purse anywhere on European mass transit – buses, trams, trains, etc;  We were just lucky.

Sunday morning we made our way by metro (I had Mel’s wallet with my purse around my neck and shoulders so they would have had to strangle me to steal it!!!) to Tim and Stephanie’s beautiful home overlooking the rooftops of Paris for a lunch cooked by Stephanie whom he met when she had stayed with us in her 20s one summer back in Aix in 1971!.  We walked down the Rue Mont Calm looking for number 56.  Like Harry Potter’s railway platform the numbers went from 54 to 58 with NO 56??? Had their apartment disappeared?  Mel called Tim who quietly replied “You bloody wanker! We live on the Rue des Martyrs – we haven’t lived on Mont Calm for 15 years!”  Soooh, senior moments aside, we ended up being spoiled rotten over a scrumptious lunch of smoked mackerel pate, fresh asparagus, pissaladiere (not what it sounds like but a tart of onions anchovies and olives) cheeses galore and strawberries and crème fraiche in tubloads.  Tim produced a stunning white St Joseph from August Clape (very rare) and then a 1998 Cornas from Clape which was ethereal.

The problem for us when we go to Paris is that there are so many restaurants that we are told by friends we need to visit but then we only have maybe five or six meals and so we tend to not risk too much experimentation and go back to what we know and love. And so that last night  we returned to Chez Georges and polished off another grilled Dover sole and a poached turbot with sauce Bernaise and downed another case of Provence rose!  No hangover at all just a taxi ride to the TGV again – this time just 2 ½ hours into the very heart of London.  Stayed at the Hilton Kensington Palace and walked through Hyde Park in front of Will and Kate’s town home and lay down amongst daffodils and primroses in the sunshine before the sun set and time for a short walk to Kensington Church Street for dinner at “Clarke’s”.

We met Mel’s beautiful elder sister Carole and her husband of a thousand years Sir James Guise (Jamie to all and sundry) and Sally Clarke gave us champagne rose and her pristine fresh simple but sophisticated organic food and we drifted off to sleep and caught the first plane out to Boston in the morning.

By the way, the Heathrow express train leaves Paddington station (5 mins from our hotel) every 15 minutes and does the hour’s journey by car or 60 English pounds taxi ride in just 15 minutes for 21 pounds!

Arrived back home to find the remaining foot of snow (from the 9 feet we suffered this season) still blanketing the garden and a 35-degree windy afternoon whipping around our frozen bodies.  I knew we should’ve remained at the Farandole in Bandol!