Harry’s Bar was opened in 1931 in Venice by bartender Giuseppe Cipriani. The story goes that a young man from Boston, named Harry Pickering had been frequenting the Hotel Europa in Venice, where Giuseppe Cipriani was a bartender. When Pickering suddenly stopped coming to the hotel bar, Cipriani asked him why and Pickering explained that he was broke. Cipriani loaned him 10,000 lire (about $500 US [$7,839 in 2015 dollars]) and two years later, Pickering returned to the hotel bar, ordered a drink, and gave Cipriani 50,000 lire in return – some tip!!!.  But, wait, there’s more!  “Mr. Cipriani, thank you,” he said, “Here’s the money. And to show you my appreciation, here’s 40,000 more, enough to open a bar. We will call it Harry’s Bar!”

Today Harry’s Bar is famous the world over with outposts in New York and Buenos Aires. The current patron, Arrigo, is the grandson of the former owner and still comes to the restaurant every day. The restaurant invented the world-famous Bellini cocktail which is a mixture of Prosecco sparkling wine and pureed fresh peaches.  It became so popular that he’d serve it year round using a teardrop of grenadine to color the bottled peaches in the winter to make it like the summer drink. 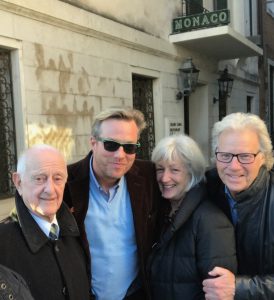 Mel and I have spent many happy hours in “Harry’s Bar” in both Venice and New York. In the 1980s, when we lived in New York and owned Jams restaurant, we used to frequent Harry’s Bar located then opposite the Plaza Hotel on 5th Avenue and always ordered a Bellini with one of their wonderful Harry Cipriani sandwiches (see below).   We did not return to Harry’s Bar in Venice until 2005, over thirty years later.  Sentimentally, we had returned to that old original Harry’s bar close to the Piazza St. Marco and went into the crowded restaurant and sat at the bar awaiting our table.  The Italian bartender seemed to recognize us and approached Mel and said (I joke you not!), “The usual, Mr. Master?” Mel was stunned. It was the same bartender who had often served us in NYC all those years before.   As it was a cold January day, the bartender shook up a couple of Americano’s and poured them carefully into two martini glasses (Americano is Campari and sweet vermouth in equal parts).  “For you, sir – Bellinis in summer, Americanos in winter,” beamed the bartender who had worked both in Venice and in New York and remembered us still.  Now, that’s a great bartender!

The cocktails were always accompanied by Harry’s little cheese and ham finger sandwiches.  We usually followed them by eating their famous and fabulous ‘fettuccini Alfredo’.  This famous dish was named after Alfredo di Lelio who invented it in 1914 at his restaurant ‘Alfredo’s’ in Rome for his pregnant wife.  She had morning sickness and could only have simple food.  It’s just fettuccine cooked ‘al dente’ with butter and parmesan to make it a really, delicious simple dinner dish. 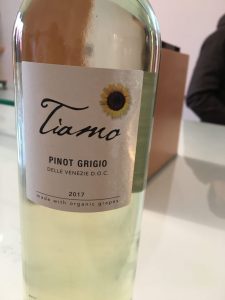 On top of that – we visited Harry’s this year again (2017) in December.  We were in Italy with our son Charles (an extraordinarily gifted wine ‘taster’) to blend our Prosecco and Pinot Grigio wines in Treviso (just north of Venice).  Our ‘plane back left at 2 p.m. so OBVIOUSLY we called Harry’s and asked if we could come in at 11 a.m. for a bite to eat before we left Venice.  The bar was open but not the restaurant. On arrival we were told that we could only order champagne (French!!!) or coffee and only cheese and ham sandwiches before mid-day.  Just as the champagne was being poured the maître d’ arrived and rushed over to Mel and beamed “Benvenuto senore Master!”

He assured Mel – of course you can order fettuccini Alfredo and white wine – we were VIPs!  So Charlie ordered two!!! Our newest sales consultant from New Orleans, Preston Trahan, was with us so it wasn’t overkill to our livers!!!  Just as we tucked into the fettuccini and Livia Felluga’s pinot grigio the door opened and another freezing gust of air from Russia ushered in Arrigo Cipriani himself.  He’s 87 years old.  He was dapper in a beautifully cut suit, silk tie and matching pocket handkerchief.  He still remembered Mel from his days in New York when he first opened Harry’s Bar and Mel opened “Jams” restaurant with Jonathan Waxman.   “Eh, I ‘ave a big treat for you” he said with a twinkle in his eye “My own favorite luncheon dish”, and he disappeared into the kitchen.  A huge serving dish of prosciutto arrived with little white bread sandwiches which were filled with smushed hard-boiled eggs with white anchovies and mayonnaise! Stupendo!

It turned into nearly a 5 – course lunch and all before mid-day!!!

Of course, we drink our own organic Tiamo Prosecco every day for breakfast…LOL!! But it makes a wonderful Bellini.

Remove crusts from white sandwich bread.  Brush each slice with above mix & place 1 slice sharp white cheddar cheese & 1 slice baked sweet ham on bottom slice of bread and grind on fresh black pepper.  Add 1 slice gruyere or Swiss cheese and place 2nd slice bread on top, wrap in saran wrap and refrigerate until ready to serve.  To serve – brush each side of sandwich with clarified butter or olive oil & sauté COVERED over moderate heat until golden brown.  Turn over and repeat. Cut into 3 fingers and arrange on arugula leaves tossed with spoonful of the mayonnaise/mustard sauce.  Mmmmmm, smashing! Serve with ANY of our organic Tiamo wines.