Paris was half empty two weeks before Christmas.  Mel and I couldn’t believe it.  The cafes, however, were full of Parisians.  So unbelievably sad to think that the Daesh (ISIS) terrorists who had killed 129 people and wounded 352 mostly young people would scare tourists away from the city of Light. They don’t understand that nothing they do will ever will prevent this great city of its thinkers, writers, creators, artists and most of all its free democracy from ever changing.  Daesh’s loathsome Mediaeval policies will NEVER put a dent in this shining city of light.

We were here to meet our son Charles and his beautiful wife Mona for a week of wine blending and meetings with our French growers. We had a magical night in Paris with dinner at the world’s best and tiniest wine bar, Juveniles at 47 Rue de Richlieu. Wonderful food and some excellent wines.

Next morning we took the TGV to Nantes in the west of the Loire valley not far from the Atlantic where we picked up a car and drove immediately to Chateau de L’Oiseliniere in the heart of the Muscadet wine country where we produce our Le Charmel Muscadet. This beautiful domaine is owned by the Verdier family and the first Muscadet vineyards ever planted took place here on the estate back in 1635. 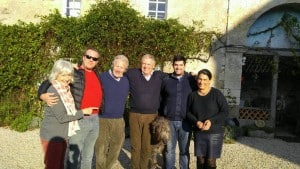 Antoine Verdier was there in the courtyard of the chateau to greet us with what looked like a small racehorse but turned out to be his Irish wolfhound!  We immediately set to work tasting through several cuvees for our 2016 vintage. The wines were terrific and Mel and Charlie were very excited with the results.  Then after an aperitif of the 2015 vintage from the estate we joined Antoine’s father at a superb lunch cooked by Madame Verdier and after the initial questions about the crazy American political scene, the conversation turned to “whatever happened to Muscadet?”  It used to be one of the biggest selling white wines but now it is off most people’s radar. Its delicious, delightful and hugely appealing but sales today are one third of what they were ten years ago.  Perhaps Muscadet became too popular and then the quality was forgotten for quantity just like in the Beaujolais and other regions of the world which do the same.  Now, it is small dedicated growers like Monsieur Verdier who are bringing the very best of this elegant and quaffable wine back into the public eye.

At lunch we drank some older vintages of Muscadet which were superb including a 2005 which tasted just like a top quality Chablis.  People need to fall in love with this charming wine and we will do our best to help this. It’s a wonderful wine and deserves a much greater recognition (again).

In the afternoon we drove south for us to arrive in time for dinner at a tiny inn just north of Bordeaux in the heart of cognac region. We stayed the night and had dinner in a rather run down hotel in the town of Pons but we DID have a couple of nice Cognacs!

Next day very early, we drove to Lestiac near Bordeaux where our EXEM red Bordeaux wine is blended and produced. The vineyards we work with there are all sustainable and it shows in the purity and richness of the wines. Mel and Charlie tasted though more than a dozen possible wines for the final red blend (70% merlot and 30% Cabernet Sauvignon) and then set to work on the white which we have only just introduced to the US market. The EXEM white was all citrus, gooseberry and lime mixed with honey, passion fruit and honeysuckle notes.  The red wine was superb this year and we discovered warm blackberry flavors mixed with soft cassis and vanilla overtones.  EXEM is truly a wine for all foods as it is soft enough for salmon and deep tasting enough for all meats.  Why, it’s just as good as that other Chateau just across the river called Chateau Haut Brion! 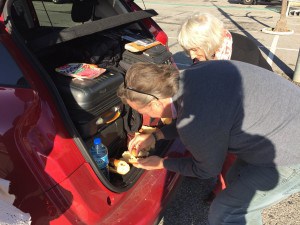 No time for lunch and so we stopped at a supermarché where we bought some baguettes and freshly sliced ham and Charlie made ‘sandwiches au jambon avec moutard’ on the back of the car! Delicious! Then on South West to the Languedoc and dinner with our wonderful Languedoc producers in the Mediaeval city of Carcassonne.  We were walking over the great drawbridge into the ancient 14th century cobbled streets to meet our hosts when the skies opened up and we were caught in a deluge from above.  We ran screaming and laughing toward the restaurant but had to dive under an awning on the way only to find two very soggy producers already there!

“Alors!” grinned our French friend, “the English always bring the rain with them!”  Five minutes later we walked arm in arm with our old pals to a delightful dinner and steamed ourselves dry with ample bottles of vinous delights.

Next morning we spent five hours of tastings and blending again mainly to make our Le Charmel Pinot Noir and a few other special wines from the region and then we were off to see an old friend not far from Carcassone who was just completing the building of a fabulous new winery, one of the most modern in the whole of the south west of France.

We stared in admiration at our friend, the young Laurant Delauney with whose grandfather Mel had stayed aged 17 in the turret of their chateau in Burgundy.  It was back then that Mel confirmed his passion for wine and now here was the guy who I had held in my arms as a wee baby, humble as always showing us his magnificent new creation.  Dug into the cool hillside the vast stainless steel tanks towered above our heads into the far distance like some Alice in Wonderland dream.  The shiny new oak barrels stood like soldiers in layered perfection in the adjacent massive “cave”.  Laurant is also the person we work with in the production of our Le Charmel Rhone and so we took the opportunity of tasting though our new blends on this as well since he had shipped them up from the vineyards in the Rhone valley.

We stayed the night in Montpelier, the university city of the south and ate at the only starred restaurant of our trip.  OK, well… my appetizer consisted of 6 plates (yes, six) surrounding me (thank heaven the table was huge and I was a kilometer away from Mel).  Warm foie gras custard, teacup of beef broth, beef bone with marrow, carpaccio strip with anchovy paste, fig tuile with mashed prune puree and 5 different salts and 2 powdered something-or-others.  Well that was enough for me for dinner!  I do wish these silent, studious, serious places in the new dining experiences of Michelin starred emporiums would lighten up a bit and have fun for a change.  I never want to eat at one ever again. Sorry Mel!!! 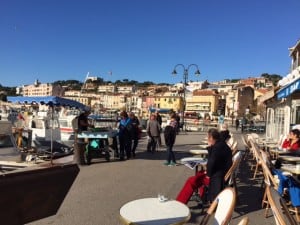 The Fishing and Wine Village of Cassis

Next day, Provence!!  God, how we love this region of France but then who doesn’t.  We stopped in the tiny fishing village and wine region of Cassis. It was here in 1969 that Mel discovered a delicious white wine and sold it to Sherry Lehmann in New York! We went back for a visit to Domaine de Paternel and tasted their delicious current release before heading down to the fishing village where we sat in the sun eating oysters and sea urchins and drinking Cassis rosé.  After lunch we all took off our shoes and ambled down the beach and had a siesta on the warm pebbles with the lazy whup of the surf in our ears.

We then headed to the other lovely seaside resort and wine region of Bandol and stayed in Sanary sur mer at the lovely “Farandole hotel” right on the beach.  We had dinner that night in Sanary at the restaurant  “Le Petit Cour”, one of our favorite restaurants in Provence with the wonderful young couple who make our Provence rose.

Next morning was spent with Clem and Pauline, blending our 2016 Le Charmel Cotes de Provence rosé which we think is even better than the 2015. We have tripled the production this year after an amazingly successful introduction last year.

Mel and I had lived twice in Provence. The first time was in Aix en Provence from 1969 to 1974 and the second time in La Garde Freinet from 1990 to 1999 and Mel had rented our old home, a beautiful old “mas” (farmhouse) in the middle of the vines for the following week for us all to stay and where we were to be joined by my two sisters. Mel is fearless!! 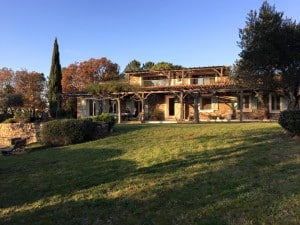 This is the home that was called “Le riseau de Tortue” or Tortoise Creek and where the name of our wine label Tortoise Creek was born!!   The stream and tortoise pond are still there, as is our old grand piano (which we had sold with the home) and so somewhat surprisingly was a Victorian portrait of Mel’s grandfather on the wall at the top of the stairs!

Back in the 1990’s we were always having massive problems with getting water and electricity but now everything works!  Electronic gates, mains water (not wells and pumps), new linen covers on our old English sofas and armchairs and our big ice machine (given to us in 1970 by Dave Edgerton, the founder of Burger King!)  It was surreal and magical for Mel and me to say the least.

Our neighbors are very wonderful old friends, Deke and Gilly Arlon and they invited us to dinner our first night and what a dinner it was.  We began with foie gras made by their local restaurateur friend which was sublime and then Deke gave us a magnum of glorious Condrieu from Yves Cuilleron and then three Chateauneuf du Papes.

The rest of our week was spent idyllically prowling the markets of Cogolin near St. Tropez, Lorgues and Vidauban each day for fish (loup de mer or bass costing the same as the weeks rental!), lamb, cheese – oh boy oh boy the cheeses, veggies and citrus fruits still with their leaves on. Swoon!  We spent hours, literally, on discussing menus for the week and fought over who was going to cook (Georgia & Georgio artichoke risotto, me fish and roast chicken, Charlie & Mona tabbouleh, pulled pork, duck breasts on the barbecue).  We drank I don’t know how many magnums of Provence rose and invited old friends from all over to join in the fun. The iPhone playlists were booming, the fire was roaring, the laughter was never-ending and better than everything – the wine never ran out!!!

“We’ve just gotta do this again,” grinned Mel as we drove down the drive through the beautiful heather and wild broom hills and back to Marseille to catch the TGV to Paris and Boston the following day.

Happy New Year everyone – aren’t you glad we all don’t sell rivets??!!