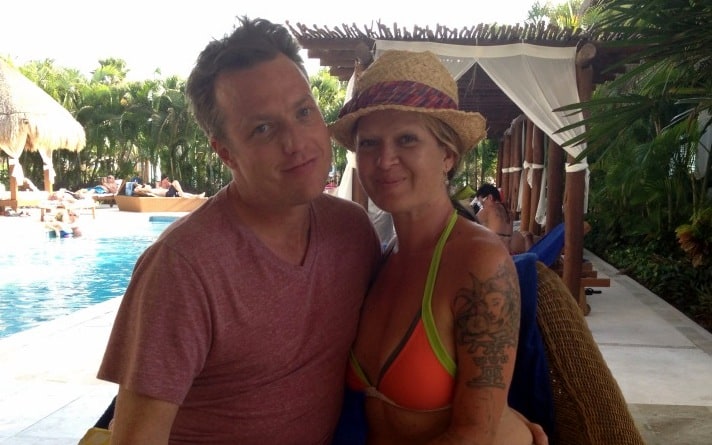 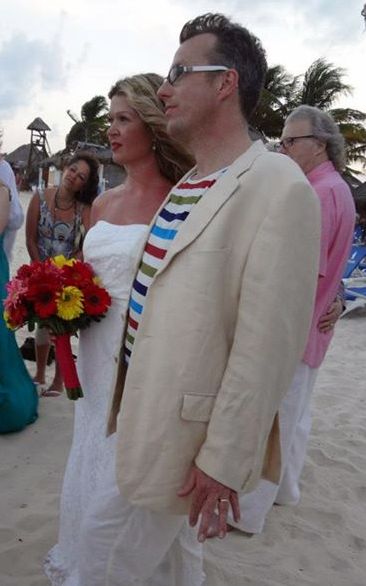 Our beloved son Charles married the girl of OUR dreams.  Forget ‘the girl of HIS dreams’ and concentrate on Mel and me for a moment.

This extraordinary young woman, Mona Fahmy, is the sort of daughter-in-law we parents secretly know is just the perfect human being who will love your son unconditionally, support him in adversity and in his achievements as well,  forgive his faults but lead him into more positive territory and look like a movie star even without makeup!

This amazing event was formalized this past April in front of their lifelong pals and their two darling offspring (from two different partners) and of course their old fart parents and it all took place in a hotel  about an hour south of Cancun in Playa del Carmen in Mexico. 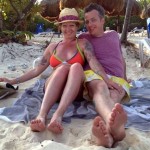 All 30-plus guests arrived to find a ‘walled-in for safety’ hotel complex with seven restaurants and a gazillion rooms, suites and cottages with swimming pool canals over a mile long winding through the lush palms and colorful gardens and ridiculously gorgeous beaches of endless soft sugar pink sands leading into crystal clear warm ocean waves and of course vendors of everything everywhere!

The marriage itself was going to be presided over by a Mayan Shaman called Eduardo. Mona and Charlie had already been married in the registry in Denver the previous month.  This was to be the romantic blessing.  That is to say UNTIL the hotel stopped the Shaman from even entering.

Aha! A challenge for Mel and Charlie!  Between them they eventually managed to get Eduardo into the complex by insisting that he was a guest of ours and then promising that the ceremony was only a blessing.  After paying a $100 day pass for Eduardo, the hotel grudgingly let the ceremony/blessing happen But only on the beach on the part that the hotel didn’t own – that is, literally, by the water!.  So it was arranged it for sunset. ng the hotel.  No, no, no, they said.  If you don’t pay the hotel $3000 for the marriage package you can’t use the hotel to get married.The older generation and the betrothed couple stayed in what was called the “Platinum” rooms (more pricey of course) on the beach with Jacuzzi baths on their individual terraces. We were all given bracelets that you had to wear throughout the stay to signify how up the hotel class system (read price) you were.  Platinum Swells (like us old farts) didn’t have to walk two kilometers to and from the beach and had access to better free alcohol! We brought two cases of rose with us as we had been told the wines were terrible (and they were!). The customs at the airport in Cancun put our bags through an x-ray machine, saw the wine and searched our bags looking for “other drugs” perhaps! I am not sure why one would take drugs TO Mexico! 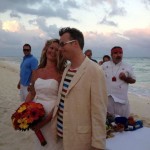 The table was set up on the beach with us all holding hands in a circle. The bride was breath-taking – her long gold-tinted hair shimmering in the warm sunset and cascading over her stunning white dress with its long train resting in the warm sand.  Charlie answered the Shaman’s questions of fidelity, forgiveness and respect with his cream linen jacket sitting lightly on his big strong shoulders.  We all shared the honey and anis from a dried gourd, the bite of tamale, the wooden rattles and the Mayan songs to the wind, water, fire and earth. Perfect.

one of our old friends from France, Pierre Hugo.  His gift to the couple was a duo of gold and sapphire pendants designed for his father by Jean Cocteau  himself – Amazing, gorgeous and generous!

As soon as we started filing into the restaurant the maître d’ pointed out that two of our guests were wearing shorts and so could not come into the dining room.

“Are you kidding us!?” we all shouted.

“This is not exactly the Ritz and it is 90 degrees outside!” we added

The bride’s beautiful eyes were watering up – I was weeping with frustration, the men were all shouting at the Nurse Ratchet manager and then two security men strutted in bristling with guns!!  Waaaah!

The offending short trousered duo stormed out and we all were silent with anger and shock but then 15 minutes later, the first offender (a young pal from Denver with a bodybuilder’s physique) threw open the double doors of the restaurant and stood in the spotlight wearing a pair of white Elvis Presley tight trousers and nothing else!!!  (He’d gone down and purchased them from a hotel store).  There was nothing in the rules about bare chest or bare feet and so there were whooping cheers from everyone. He was followed by our son-in-law (daughter Amy’s husband) who had literally run 2 kilometers back to his room and dressed up in a suit, tie and shirt, woolen socks and shiny shoes and was sweating like a road-sprayer all over the purple-faced embarrassed manager to more whooping cheers.  He sat down in a relieved heap after having lost 15 pounds in weight – mostly tequila and tortillas. More cheers! The evening was saved. 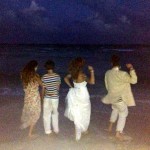 as battery acid. However, because Mel and I and a few others were so super important platinum members with blue bracelets, we could drink slightly better wine in our posh Platinum bar! So we tried to take it to the restaurants with us but it kept getting confiscated!

“If you are not wearing a blue bracelet you can’t drink the better wine” they told those who didn’t have “THE bracelet”.

We offered to pay extra but no, the rules were the rules.  We all felt we were back at school trying to avoid getting caught by the principal!!

We did have one outing to another resort just up the road called the Rosewood Mayakoba which was fabulous and probably fifty times more expensive than where we stayed. We went there to lunch with our  buddies Roger and Jenifer Greenfield who told us about it (he is a super successful restaurant guy from Chicago and knows all the cool spots!). We had delicious lobster tacos and a super rose from Baja.

The rest of our stay passed so fast and then suddenly it was time to go home.  It had been the most beautiful wedding we had ever attended and with such magical friends all around us. One week later back in rainy New Hampshire Janie and I celebrated 49 years together but sadly without Edouardo (Mel wore shorts!)