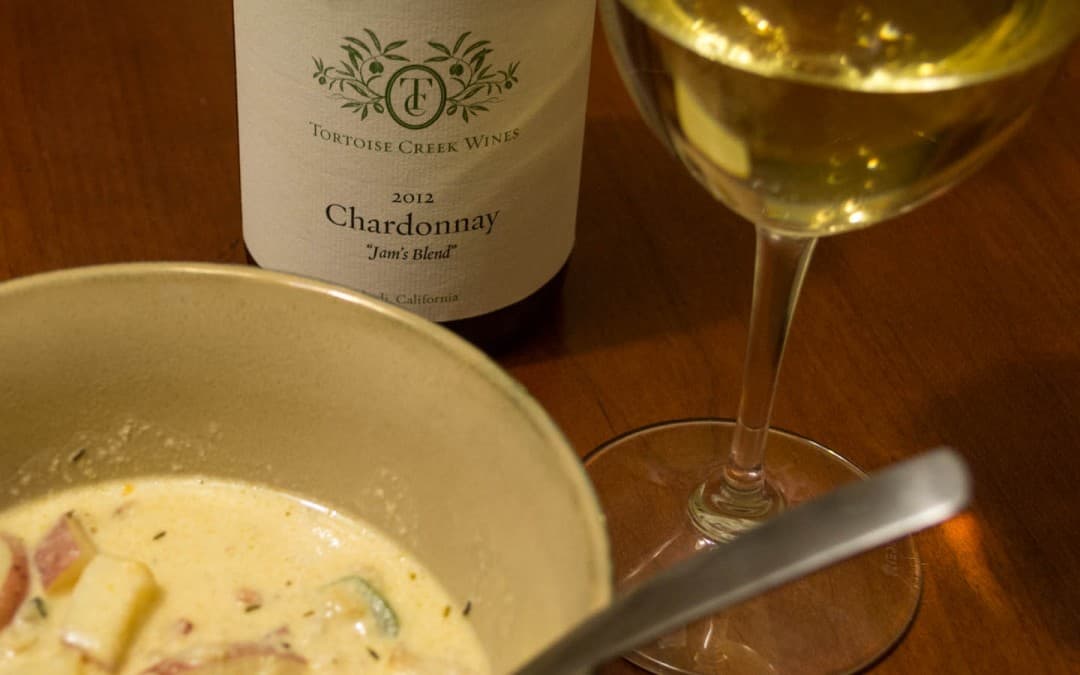 Master Wines is a family wine company, with husband/wife team of Melvyn and Janie Master and son Charlie running all of their operations.  They’re also a partnership with Winesellers, Ltd. – their importing and distribution company run by the Sager family.  And luckily for me, they’ve let me in on a piece of the action – my name is Phillip Holland, and I’ve been friends with Charlie for years.  Over the past couple of years, I’ve been helping with maintaining their internet presence and general marketing tasks.  While Janie normally writes the “Through The Grapevine” posts, this time they’ve tasked me with writing a post, and I was thrilled to do so.  While normally based in Denver, I’m in St. Louis this summer for a work project.  Mel shipped me a few bottles of their Chardonnay, and Janie sent me a recipe for her famous Clam Chowder, and told me to create.  I jumped at the opportunity.

It should be noted, however, that I am far from a professional chef.  I’m not even a talented amateur.  But I figured if I could just follow a recipe, I’d be able to come out with a decent product.  Little did I know how much I would struggle with this little task. 🙂

Chop celery into large chunks and place in heavy-bottomed casserole with quartered onion, crumbled bayleaf and 2 cups water.  Add drained clams and steam, covered, for 8-12 minutes stirring once to ensure all clams are opened up.  Discard any that do not open.  Strain through fine sieve or cheesecloth and retain liquid.  Cool, remove clams from shells and chop into small dice.

Meanwhile, chop bacon finely and place in heavy-bottomed casserole with 1 tbs oil or butter and chopped onions. Cook over slow heat until onions become transparent.  Add garlic and cook 1 minute more.  Now add potatoes, thyme and clam liquid and simmer gently for about 7 minutes until potatoes are nicely softened but not falling apart.  Add milk, cream, chopped clams and spicy seasoning to your taste and simmer gently for 3 mins.  Adjust seasoning with salt and leave to marinate the flavors for 5 mins.

Serve immediately or cool completely and reheat over very low heat to warm and serve later.

First things first – fresh clams are neither easy to find nor inexpensive in the middle of the country.  I managed to find some at the 3rd grocery store I went to, and I bought all they had – a little over 2 pounds, $23.  This would require me to reduce the recipe by 20%, expecting now about 2 cups of clam chowder for approximately $30.  I could have bought canned clams, but I was trying to be as authentic as possible.  Here’s the layout of most of the ingredients (the thyme was found a little bit later): 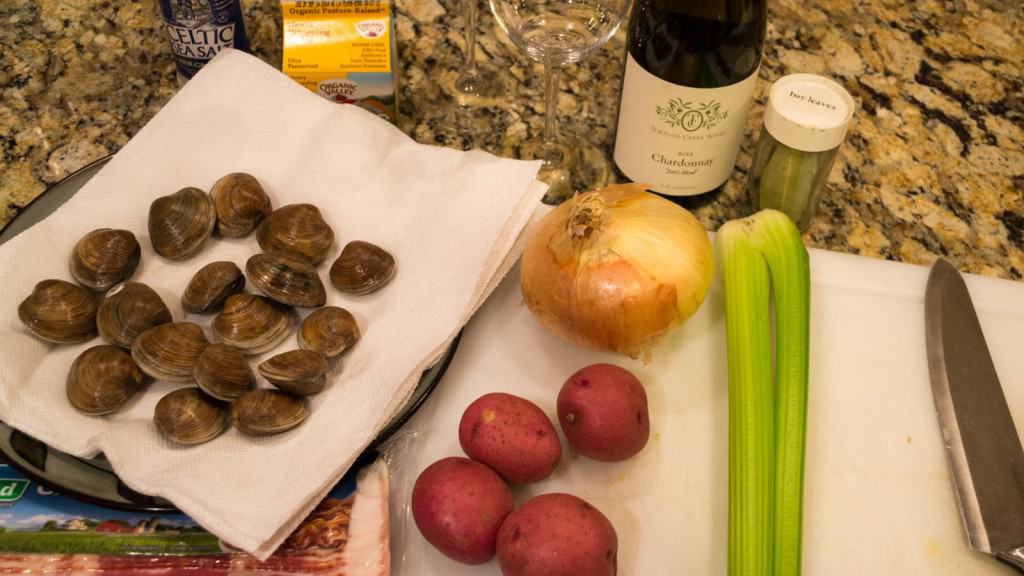 You may be thinking, “That doesn’t look like 2+ pounds of clams,” and you would be correct.  I had to throw out about 8 clams that were already open and dead before even beginning cooking.  Thankfully, I’m staying with friends that aren’t big seafood eaters, so I knew I wouldn’t have to share. 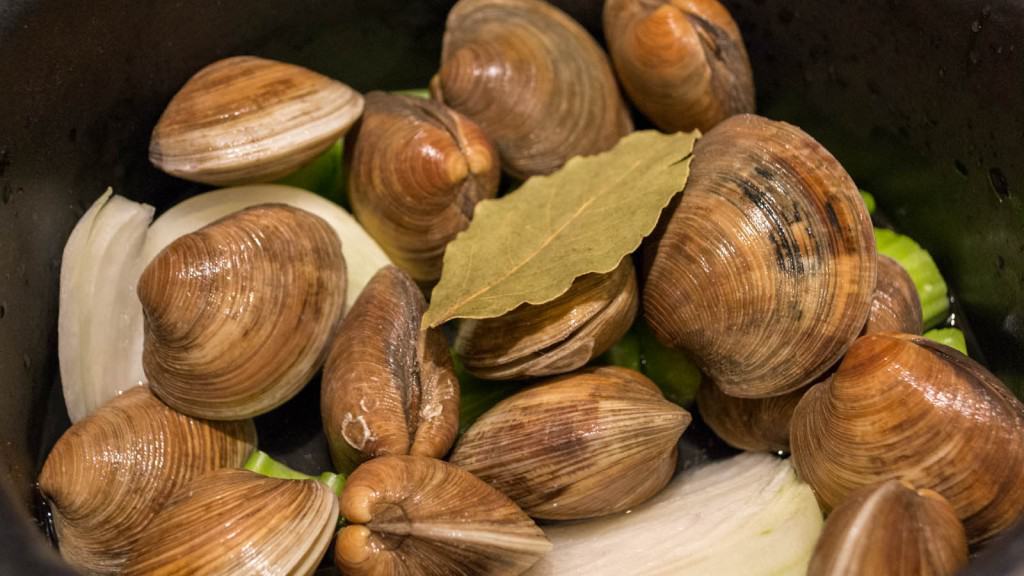 Following the recipe, I set the clams in a pot (I didn’t have a heavy bottomed casserole) with a quarter of an onion, chopped celery, and a bay leaf and added water.  I steamed the clams for a bit, and thankfully, they all opened and cooked perfectly.  First hurdle cleared.

After straining the clams so they could cool, I started preparation on the base of the soup.  I added the onions, butter (of course I chose butter over oil), and bacon to a new pan, turned the head on medium-ish, and decided it was time to pour myself a glass of wine.  Thankfully, I had a bottle of Tortoise Creek Chardonnay right there, so I cracked it open and poured. 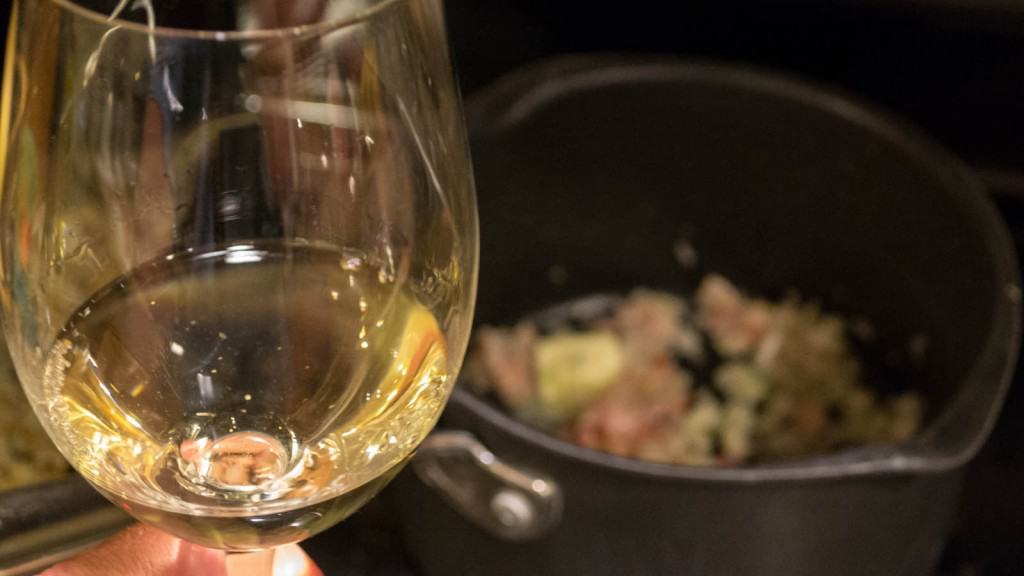 At this point, I forgot to take any more pictures for the remained of the preparation, but everything went swimmingly.  The onions and bacon cooked down, and I added the potatoes and thyme and cooked them with the clam liquid.  Finally I added back in the chopped clams, the cream, the milk, and another compromise – Emeril’s Essence Seasoning in place of the paprika.  This may be considered sacrilidge by some, but I promise it was done with the best of intentions – I wanted more complex spice than just tabasco or chili powder, and we didn’t have paprika on hand.

So how did it turn out?  Even with my amateur skills and compromises, it was fantastic.  I am glad I was unforgiving in only choosing the best clams that I could find, and I probably added more bacon and butter than I should have.  The clam flavor was present but not overwhelming, enough that my hosts even tried it and didn’t react negatively (a big thing to say for a family whose favorite fish is steak).  I had plenty of Chardonnay to drink with it, and the pairing was great.  The Tortoise Creek Chardonnay is full bodied enough to not get clobbered by the cream, clams, and bacon in the soup, and has enough acidity to clear your palate without leaving it tingling.  A great pairing for a rainy night in the midwest.

I’m hoping Janie will send me another recipe or two to try this fall to explore pairing with the Master Wines portfolio.  She’ll continue her Through The Grapevine posts, and I’ll sneak a guest post in every so often.  It is a blessing to be allowed into the Master family! 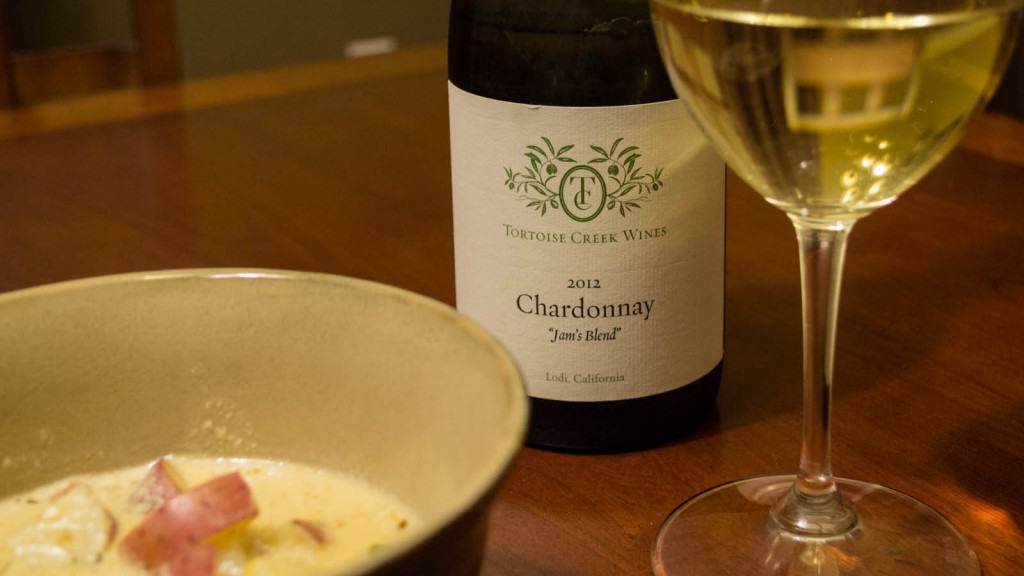