Amateur Adventures In Culinary Creations – Round Two, Chianti and Pasta 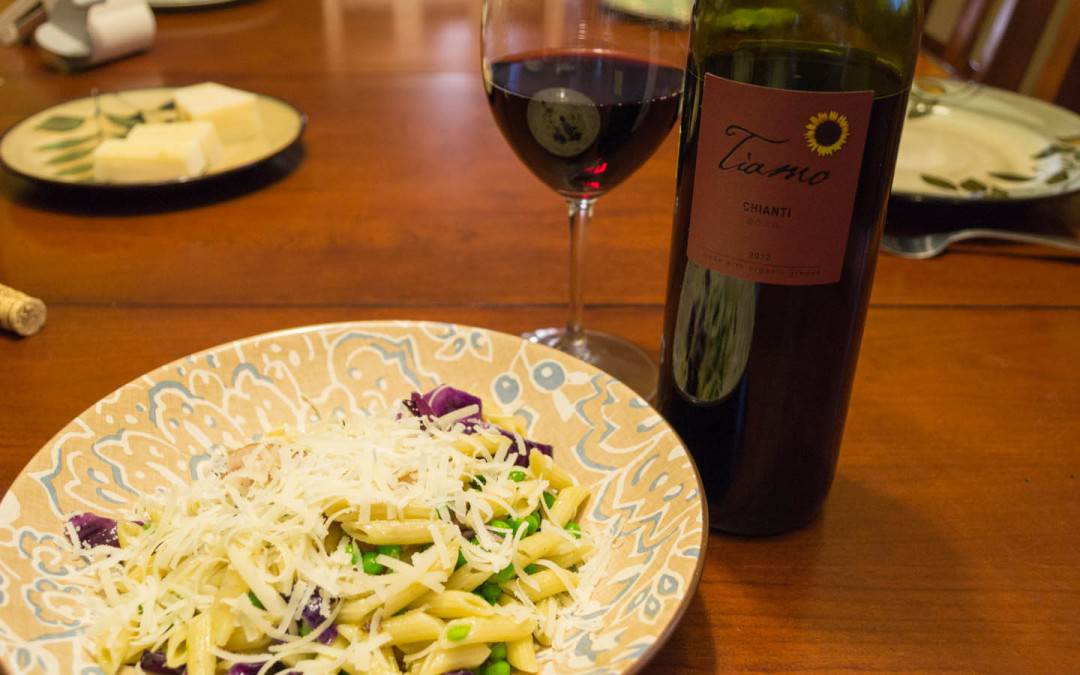 Hello Grapevine, it’s Phillip back again with another adventure of an amateur chef recreating the excellent recipes of the great Janie Master!  This week Mel shipped me a bottle of the Tiamo Chianti, a D.O.C.G. wine of 90% Sangiovese and rounded out with 10% Cabernet Sauvignon.  To pair with this delicious bottle of wine, Janie sent me an exceedingly simple recipe for pasta with peas, bacon, and pecorino cheese.  I’ll share below the mistakes and ultimate outcome of my attempt below, but first, in Janie’s words:

One of the delights of Italy is that every village restaurant still serves Mama’s cooking. Unlike France, where too many chefs try and create gastronomic masterpieces, the chefs in Italy still stick to the tried and true recipes of their grandmothers.

Last trip to blend our Tiamo wines, we ate one dinner at an inn just 45 minutes outside Venice where papa greeted us at the door , mama and daughter cooked in the kitchen and their devastatingly good-looking son searched in the cellar for local wine gems for us to enjoy. Their dog, Julio, slept impassively in front of the dining-room fireplace throughout dinner service, not moving a muscle when the local clientele scratched his head in welcome. We started with a bowl of pureed lentil soup with pancetta bacon bits scattered on the top and a ribbon of pure virgin olive oil drizzled straight from the bottle. Then Mel ate home-made golden taglietelle with soft baked chestnuts in red wine on it.   Mama made all the pastas. For me, she had just thrown halved leeks onto the wood-burning grill brushed with olive oil and placed them on top of the pasta and then scattered sage leaves fried in clarified butter on the top. Papa Antonio came to our table and grated fresh parmesan slices over the top with a potato peeler. It was heaven itself. We finished with a plate of local goat cheeses and old sheep cheese (brebis) served with a bitter orange marmalade and pure liquid honey to dip it in. Dinner, with a 1/2 carafe of local white and a 1/2 bottle of local red cost about the same as coffee and muffins at Starbucks!

One can still eat like a king in Europe if you are wise and go to local villages not up-town Ritzy restaurants.

Salt your 4 quarts of pasta water as you would for lobster cooking. i.e. as salty as sea water. Bring it to the boil and throw in a tablespoon of olive oil. This keeps the pasta from sticking together. Cook your pasta as per packet instructions – about 10 – 12 minutes for dried pasta and about 4 -5 mins for fresh pasta. Meanwhile, defrost a 16 oz bag of frozen peas in a sieve. Chop up a red chili pepper really finely removing the seeds if you don’t like it too hot. Warm up 4 tablespoons of olive oil in a small pan and throw in the bacon and cook until it just begins to brown at the edges but doesn’t become crispy. Add the chili and cook over low heat for 2 minutes to soften. Add your peas and shredded lettuce and season with salt and a little ground cumin. Warm up over a low flame and toss into the cooked macaroni. Grate a little percorino cheese over each helping.

As expected, a few substitutions were made, and a few mistakes were made, but in the end, the dish turned out pretty delicious.  While Janie’s recipe calls for macaroni noodles, my pantry was stocked full of little penne noodles, so we opted to use those rather than buy more of a different variety.  We also had just picked up fresh poblano peppers at the farmer’s market that weekend, and since my host family isn’t huge fans of spice, we used the beautiful poblanos instead of red hot chilis (we went ahead and roasted them in the oven for a bit to soften them up).  Lastly, an amateur misunderstanding – did you know that radecchio is not the same thing as red cabbage?  Well, I do, now.  I didn’t when I was at the grocery store.  So rather than radecchio, you’ll see red cabbage in my preparation. 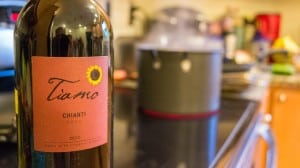 tion itself is pretty straightforward.  Boil some pasta, cook some bacon, add the other ingredients, and combine.  Serve with a little or a lot of fresh pecorino cheese on top.  Like most amateurs, I overcooked my pasta a bit, but it wasn’t mushy.  I undercooked my bacon a bit, but it wasn’t mushy either.  Next time I’ll probably take a minute off the pasta and add a minute to the bacon for it to end up just right.  I’ll probably also shred the radecchio a little finer – that is, if I actually buy radecchio!

I’ve found that Americans often think that simple pasta dishes will be devoid of flavor, which is far from the truth.  Comments from the peanut gallery included “Much better than I expected” and “I actually think it could use more spice”.  Even the kids at the table enjoyed it!  If I am to be my own critic, I think cooking the bacon a bit more would have helped a lot, and certainly a little more kick would have been good too.

The Tiamo Chianti was a very nice pairing for this dish.  Chiantis tend to be slightly acidic, and even though this offering is more balanced, it still was able to cut through the cheese and bacon on each bite.  Peas are a tough pairing item, but they played a mostly background role in the flavor profile of this dish, so they didn’t conflict with the Chianti.  I’m not positive that this was the absolute best pairing for this dish, but I’m not sure what would be better either.  I’ll just have to make it again and try it with more Tiamo wine!